Giant veggies on my mind 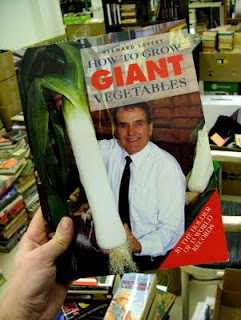 One of the many reasons I love book hunting?  Just take a look.  You NEVER know what you're going to find.  Who knew that my secret obsession with the weird world of giant vegetables would come out this way?

Wow.  Was it B. Kliban who so clearly stated the obvious?...  "Never eat anything bigger than your head."

Oddly enough, I ran into a friend at the grocery store the other night who had two amazing giant leeks in her shopping cart.  Needless to say, they weren't quite this enormous, but the synchronicity is giggle-fit inducing.
Posted by Michelle Souliere at 4:50 PM 1 comment: 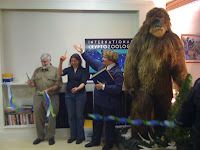 Well, it's the first real week of store hours here at The Green Hand. It will be interesting to settle into a regular rhythm.

The First Friday opening was a huge success. Thanks for coming!!! It was a narrow squeak -- I only got my hands on the permits from the City at 2:00 that afternoon! Phew. But it happened, all was well, and it was a blast.

You can see some photos and a quick write-up of the event over at Loren's website by clicking here:
Artwalk Crowds Stampede Sasquatch

There are still a few loose ends to tie up, and tons of books to process yet. I'm finishing up my newly acquired paperback bookcases (thanks to Nancy over at Cunningham Books). They are now bright shiny red! Only one left out of the three to put a final coat on. Good thing too, 'cause I have boxes and boxes of paperbacks to break out for you all to rummage through.
Posted by Michelle Souliere at 11:32 AM No comments:

Of sincerity and sleeplessness 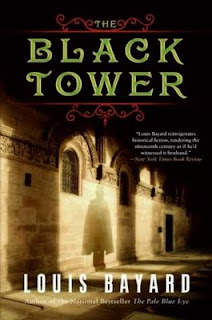 If you find yourself unable to sleep in the wee hours of the morning, one reprieve is having a good book to distract you until you are able to lure yourself back into the dreamy depths once more.

With that in mind, I would like to recommend Louis Bayard's The Black Tower. I read his earlier book, The Pale Blue Eye, only to be disappointed. Heaven knows why, but I read the whole thing, hoping for last minute redemption, I suppose. Ha! So it was with trepidation that I took home The Black Tower from the library. I couldn't resist it. It sounded too tasty!

I was not disappointed this time. On starting into the first few chapters, I was hooked. Now, most of the way through the book, I am still unable to tear myself away.

It has finally occurred to me what the difference between The Black Tower and The Pale Blue Eye is. The difference is sincerity. The characters in this book, each and every one of them, are living and breathing within its pages -- and are now alive in my own mind.

The author has wrought his magic!

This time his canvas is painted using the legendary Parisian police detective Vidocq. Narrated by medical student Hector Carpentier, the tale weaves through the layers of deception, treachery, and redemption found surrounding the French Revolution, and the son of Marie-Antoinette and King Louis XVI.


Officially, the Dauphin died a brutal death in Paris's dreaded Temple -- a menacing black tower from which there could have been no escape -- but speculation has long persisted that the ten-year-old heir may have been smuggled out of his prison cell.


Well, it's a darn good story, so I'll let you find out the rest by reading it for yourself.
Posted by Michelle Souliere at 4:30 AM No comments: