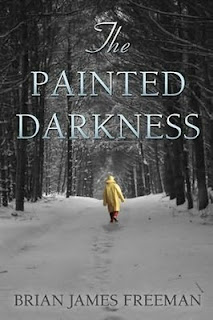 "The Painted Darkness" by Brian James Freeman is a quick, captivating read. The novella, published by small horror press veteran Cemetery Dance, sets the reader into the mind of Henry as he spends his time sunk into working on his paintings. The pieces are of a fantasy/horror bent, featuring monsters and blood, and he paints them as though in a trance, motivated by a mantra whose genesis is buried deep in his childhood – “I paint against the darkness.” He sets his brush to canvas with his father’s advice to him as a child ringing in his ears: “Just start at the beginning and the rest will take care of itself.” As he begins to work, his mind empties. Hours later he emerges from a fog after placing the latest piece carefully down with its face to the wall. It is not until much later that he inspects the latest series of work, flipping them over one after another, to see just what horrors he has painted this time.

His involvement in his work to the exclusion of all else has his wife Sarah worried. They’ve just had a fight over the amount of time he’s been spending in his attic studio, high up in the remote old stone farmhouse they recently bought. The fight caught Henry off guard as he was hurrying back upstairs to finish the latest piece. He hadn’t realized how upset Sarah was. After he went back upstairs, she left, driving off in the minivan with their three year old son Dillon to visit her parents.

Now Henry is in the old house, all alone. Alone except for the presence of his fears, a blank canvas, an approaching blizzard, a cranky and potentially dangerous old boiler in the basement, and… something else. Something so terrifying and unknown that he hasn’t seen the likes of it since that time when he was five years old.

Since he doesn’t really remember that event so well, he has no idea what he’s up against. He just knows it is very, very bad.

The novella is a tricky form. Too long to be a short story, yet not quite long enough to be a novel, its very easy to make it feel like it’s either a short story that’s been padded out or that it’s an embryonic novel not fully fleshed out. “The Painted Darkness” is one of those novellas that makes one want more, which is the better end of the spectrum to land on, as far as this reviewer is concerned.

The suspense is effective, caught as the reader is between the multiple threats of unmanageable ready-to-explode boilers, blizzards, lonely madness, upset wife, and unspeakable Other Horrors. The best ingredient, however, is the memory of child-Harry. The glimpses into his five-year-old mind’s experiences are like wandering into a snow globe crafted by my favorite kind of horror master – one who can drop tiny bits of what-was-that into the real world, creating a magic both terrifying and alluring at the same time.

All in all, a good read to curl up with by the fire on a cold winter night.
Posted by Michelle Souliere at 11:59 AM