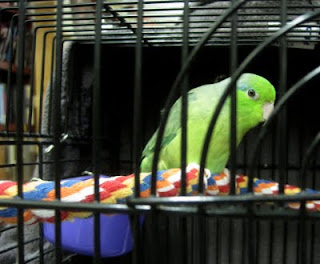 Well, it's official. So far we've had a fish, many dogs, and a rabbit visit the Green Hand. But never before had we been visited by a feathered friend!

All that changed this evening when a traveling customer, Sean, began browsing the shelves with a covered cage in hand. Who was his traveling companion? None other than Harry, a cheerful and attentive green parrotlet! He had been seeing the world with Sean, starting out at Newark NJ that morning, and jaunting about upon arrival in Portland in preparation for a ride out to an island later. Thanks to Sean for humoring my fascination with the little guy! Of course, his bright green feathers nicely match my shop's plastic bags, so when they left the store, Sean's luggage matched Harry quite nicely.

I felt that it was worth commemorating the occasion with a portrait or two of Harry ensconced in his cage. :) 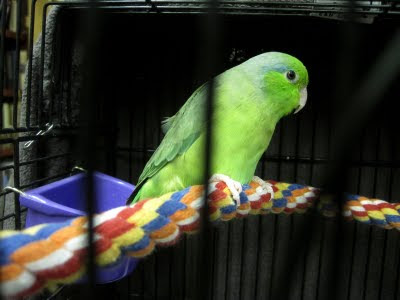 * * * * *
OSCAR UPDATE:
Many of you remember and ask after Oscar, the jumbo oscar fish, who is back living with my brother in his apartment now, happily eating 20-30 goldfish a week and growing ever more giant. 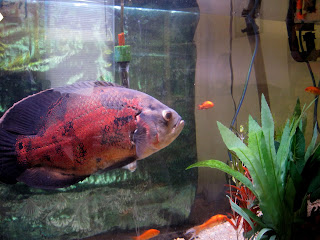 Above is a picture I took of him when I visited. To replace the constant hubbub of being in a public place, he has taken up watching television from his tank, but apparently does not approve of explosions, and takes off to the other end of the aquarium when movies and shows are rude enough to include kabooms in their plot arcs.
Posted by Michelle Souliere at 5:51 PM