At the beginning of 2013, the irony of being a bookstore owner who had very little time to read books was wearing thin. With that in mind, I resolved to READ MORE. Apparently it worked.

Here is my list of Books-I-Have-Read for 2013 so far! This does not include books I am part-way through (of which there are many); these are all books that I have finished reading. Whoo! 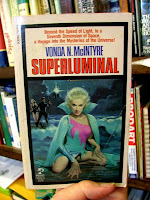 Starkweather: The Story of a Mass Murderer by William Allen

When Findus Was Little and Disappeared by Sven Norqvist

The Beginner's Handbook of Dowsing: The Ancient Art of Divining Underground Water Sources by Joseph Baum

The Magic Circle by Jenny Davidson﻿

The Maltese Falcon by Dashiell Hammett

A Hero of Our Time by Mikhail Lermontov

Georgia: In the Mountains of Poetry by Peter Nasmyth

As a whole, the list contains an overwhelming number of books which I found to be very good, and several that were outstanding. Some were classics I'd been meaning to read FOREVER, and gosh darn it, now I have.
Posted by Michelle Souliere at 1:07 PM