One year ago today, on April 4, 2014, I and a good number of my friends suffered a personal loss when Jeff Pert -- friend, writer, and cartoonist -- died unexpectedly. In the year since, his family has pulled together an excellent memorial to him and to his dreams.

Jeff attended the Odyssey Writing Workshops back in 2006, and for him it was a life-changing experience. Long a fan of horror and dark speculative fiction, Jeff used the opportunity to hone his already considerable writing skills (built over the years with a local writing group), and to begin a body of work that he hoped someday to publish. When Jeff died, it struck us that one of the things we could do in his memory was to start a memorial fund via Odyssey. With this fund, they could add to the workshop, ensuring that other aspiring writers could experience for themselves this once-in-a-lifetime chance.

In late 2014, the Jeff Pert Memorial Fund was established by family and friends. Because Jeff valued his experience at Odyssey so highly, the goal of the fund is to finance the appearance of a guest lecturer at each summer's workshop. This opportunity brings an added mentor to the workshop, giving additional resources to Odyssey students that they can use to improve their craft in Jeff's memory. One of the major elements that Odyssey offers its students is the opportunity for one-on-one and group experiences with a range of authors to increase the writer's understanding of various aspects and potentials of their own developing craft. 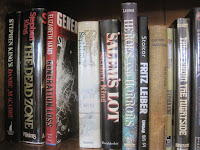 The fund was kicked off with the successful auction of two of Jeff's most prized possessions: Stephen King's Dead Zone and Danse Macabre in hardcover, both signed to Jeff. You can see them to the left in this shelfie. It shows a portion of one shelf in the glassfront bookcase where he kept the plums of his collection -- not all worth big money, you understand, simply books that were worth a lot to him.

Since its inception in 1996, the Odyssey Writing Workshop has become one of the most highly respected programs for writers of fantasy, horror, and science fiction. Held for six weeks each summer at Saint Anselm College, the workshop combines an intensive, advanced curriculum with in-depth feedback on students' manuscripts. Fifty-nine percent of graduates have gone on to be professionally published. Top authors, editors and agents serve as guest lecturers, including such luminaries as George R. R. Martin, Terry Brooks, Ben Bova, Nancy Kress, and Dan Simmons.

If you would like to make a gift to the workshop in Jeff's memory, or simply to help add to the experience of tomorrow's writers, please consider doing so in one of the following ways. It would mean a great deal to all of us, and to the small batches of determined authors who find their way into the Odyssey program.

Supporters can make a donation to support the fund at http://www.sff.net/odyssey/donations.html or mail them to:
Odyssey
P.O. Box 75
Mont Vernon, NH 03057

Please specify that you would like your donation to go to the Jeff Pert Memorial Fund.

Jeff's family would deeply appreciate friends and fans helping to build the fund so it can create a lasting legacy in Jeff's name.

Below: Jeff and I had the great pleasure of meeting one of our favorite writers, Peter Straub, at Readercon in 2012. It was a very happy day. Jeff would want me to point out to you how the photos he took of me are completely blurry.

And in closing, my favorite Jeff Pert cartoon: 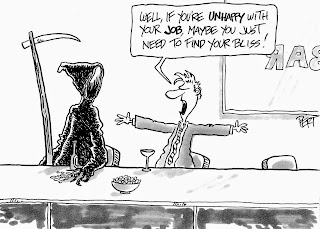 Posted by Michelle Souliere at 10:20 AM