Last weekend I undertook my annual pilgrimage to ReaderCon, down in Quincy, MA. Each year I am entertained and confounded by the epic schedule of panel discussions, author readings and discussions, and of course the delight of the dealer room, and the treat at the end of it all, the Shirley Jackson Awards.

I started out Friday by going to "The Book As Object," a good warmup for the weekend.j I missed part of the memorial panel in honor of Ursula K. Le Guin, but did get to hear about how (among other things) her story "The Ones Who Walk Away from Omelas" continues to generate a remarkable level of response. In particular, short story submissions continue to be sent to current science fiction editors by authors who feel compelled to write their own stories in response to Omelas. This is pretty exciting, considering that Omelas was published in 1973, 45 years ago! It's one of those stories, as observed by a panel member, that "changes people's lives."

You can find the story in a number of places:
-- New Dimensions 3, ed by Robert Silverberg (1973) (and later again in The Best of New Dimensions)
-- The Best Science Fiction of the Year #3, edited by Terry Carr (1974)
-- The Wind's Twelve Quarters, Le Guin short story collection (1975)
-- The Hugo Winners, Volume Three, edited by Isaac Asimov (1977)
-- Wolf's Complete Book of Terror, edited by Leonard Wolf (1979)
... and many more. For a full list, see the Internet Speculative Fiction Database.

The next panel was "Nesbit & Eager: Works in Conversation."  This time the discussion was about the relationship between the writing of Edith Nesbit and Edward Eager. Not only their literary work but also their biographical histories were compared and contrasted, lending illumination to the dim corners of their careers and writing.
Like the best panels, it raised additional questions beyond the ones it answered, and made us all want to go read both authors' books.

Here's an illustration of the Bastables' uncle being fierce with a pudding, from The Bastable Children by E. Nesbit. You're welcome.  😉 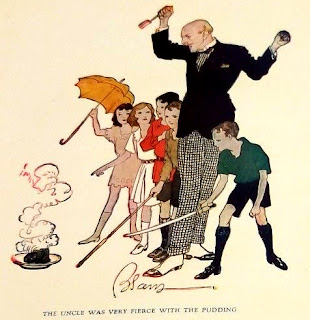