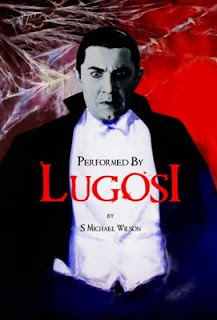 I was very pleased to receive a review copy of this book as part of the Early Reviewer program over at LibraryThing.com.

Performed by Lugosi: A bold new look at the stellar icon of fantastic cinema and the tales that inspired his greatest roles
by S. Michael Wilson
http://www.smichaelwilson.com/
2010, Idea Men Productions

Performed by Lugosi is a unique pairing of literary and cinematic sensibilities. In one volume, S. Michael Wilson has collected the original pieces of fiction that inspired Lugosi’s on-screen performances and his own thorough and sharp-witted responses to how the film studios adapted the texts to their own use, with a special focus on Lugosi’s role in the process. Stories include classics by such renowned authors as Edgar Allan Poe, Sir Arthur Conan Doyle, Bram Stoker, and Robert Louis Stevenson.

I was pleasantly surprised to find, alongside his informative and well-researched account of the films’ histories, a running current of Wilson’s own particular sly wit and his backhanded brand of movie reviewing, a style which is near and dear to my heart, and aptly suited to the callow treatment that film studios of the day often gave to their scripts’ literary roots.

Shining through the historic accounts and casual commentary is Wilson’s genuine regard for Bela Lugosi. Long a fan of Lugosi myself, I found this a very appealing mix of elements, and can only imagine that anyone curious about Bela will be likewise rewarded by their reading of this painstakingly assembled compilation. Drawing from a number of texts about Lugosi’s strange and complex relationship with the Hollywood studios of the day, Wilson discusses others’ ideas as well as his own about how Bela responded to the very particular requirements of the industry he found himself a part of, a sometimes-uncomfortable arrangement for all parties involved.

Each original story is present for the reader to absorb on their own, followed by an account of the movie that resulted. This section introduces the film’s vital statistics, including the studio’s often heavily-distorted, character-driven plot line, and the pre-screen treatment of the material, production notes, Bela’s involvement in the film, and, like a tasty dessert at the end, food for thought in the form of Wilson’s musings, which often provide an insightful and appreciative view of the movie.
Posted by Michelle Souliere at 1:14 PM No comments: