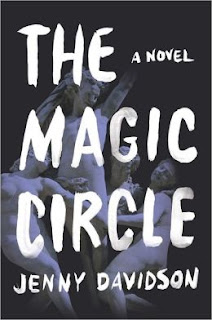 WHAT:
Author Talk and Signing: Jenny Davidson, author of The Magic Circle

COST:
Free and open to the public. Refreshments will be served.

Come meet author Jenny Davidson, who will be discussing her new novel The Magic Circle at Rose Contemporary on April 17th. Copies of the book will be available for purchase and signing at the event.

Jenny Davidson is the author of four novels and two nonfiction books about 18th-century British literature. She has an insatiable lifelong appetite for fiction and a more recent obsession with endurance sports; she is currently training for Ironman Wisconsin. She lives in New York City, where she teaches in the Department of English and Comparative Literature at Columbia University. Her next book, Notes on Style: A Life in Sentences, will be published by Columbia University Press in 2014.

The Magic Circle, as its name suggests, centers on the theme of Huizinga's "magic circle" of game play, and his reminder that "there is no formal difference between play and ritual." (Johan Huizinga, Homo Ludens: A Study of the Play-Element in Culture)

Like a ramped-up and widened version of the film Rose Red, the story embraces the very personage of the Manhattan neighborhoods surrounding Columbia University, with special attention paid to the campus's very real history as an asylum, and to the neighboring park, Morningside Heights. These places seem to charge the very earth beneath them with their own personality, overlooked by the solemn watchtowers of the Cathedral of Saint John the Divine.

In this setting, main characters Ruth, Lucy, and Anna, are but tokens in a larger game. The reader never quite knows who is the gamemaster. Who really makes the rules everyone plays by? Each roll of the odds twists the participants in a new direction as they move from the historical clues of Ruth's game, Trapped in the Asylum, to playing physical roles in Anna's modern NYC Bacchae. The intoxicating brew includes elements of geomancy, urban exploration, LARPing, mixed with the very real humans who find themselves wound unexpectedly tight within in the web formed when real life is threaded through with a touch of magic.

Come to nosh, drink, and talk about this and other things with author Jenny Davidson next Wednesday night!
Posted by Michelle Souliere at 1:15 PM No comments: