While I read a lot of genre fiction, I rarely read books that might be termed as fantasy, having binged on it heavily as a teenager.  However, once in a while a book comes to hand, often randomly, that tips the scales and pushes me to read something full of dragons, wizards, kings and queens.  This is the case with tonight's addition to the summer roster of Recently Read Books. 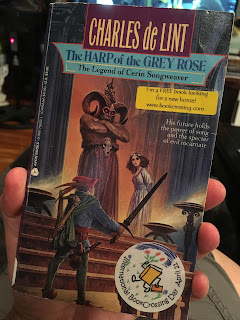 First let me sing the praises of one Charles de Lint.  I have long loved his Newford Stories, but have not often read his pure fantasy.  Enter The Harp of the Grey Rose: the Legend of Cerin Songweaver, found by happenstance on a gray day on the Free Book shelf at Flatbread Pizza here in Portland -- because there is nothing more alluring than a book you didn't have a moment before, and de Lint's name is always a glint of gold in amongst any assortment.

This is a brief novel, a delightfully refreshing 230 pages in paperback.  In it we meet Cerin, maturing from young orphanhood with his foster mother at the edges of Wran Cheaping village, watching her witching ways, meeting her tinker kin, and wishing the old tales were alive for him to experience.

Then he meets the solitary Grey Rose, losing her almost immediately to a horrible warlock long thought to be only a legend.  And so his quest begins.  Along the way there are the requisite near-freezings, near-drowings, and the companionable talking bearfolk.  I won't tell you more -- just know that you will meet many myths and mythical creatures, experience harrowing sorrows and witness desperate acts of heroism.  Again, this is a fast ride -- de Lint's pen fires a lightning streak among the forests and shadows for you to follow.

While I love de Lint's storytelling, it is hard to explain precisely why.  What makes him soar above other fantasy writers for me, luring me to keep on reading?  I suppose for one thing de Lint is not heavy-handed with exposition of plot, setting, and characters.  He describes within the telling.  His characters bring you into their world through their eyes, into their heads through their thoughts.  The magic in his stories is lived by the characters, and by you at the same time, likewise their doubts and questionings.

So if you want to escape into another world, follow that harper of the pen, Charles de Lint.

Secondly, we come to Neil Gaiman's American Gods, which I will treat more briefly, since it is so much in the public eyes these days with the new Starz adaptation fresh in people's minds.

No, I hadn't read it yet.  I knew it only by reputation.  ("BLASPHEMY!" you shriek in shock and amazement, holding your head between your hands and staring in shock at the Recalcitrant Bookstore Owner!)  It was on my personal 2017 list of Books I Should Have Read By Now, and I was bound and determined to read it before I sat down to watch the show.

I had tried reading Good Omens shortly before, but it fell flat for me.  (I know, again you shriek "BLASPHEMY!" right?)  So with that disappointment fresh in my mind, I had no high expectations for American Gods, even with almost two decades of my friends' and customers' hype ahead of it.

I fell for it almost immediately.  Something about the deadpan delivery of our narrator, Shadow, perhaps.  And the idea of all the layers of deities and entities that we humans so love to conjure up, no matter what era or belief system we are a part of.

But overall there is a great feeling of trueness about it -- and I'm not saying TRUTH here -- I'm saying trueness.  True humanity, true imagination, true nighttime logic -- because one last thing I must say is that the entire book, real as it feels, also feels like a dream.

I hope you have all found time to read some wonderful books of your own out there this summer.

À bientôt!
Posted by Michelle Souliere at 8:29 PM No comments: