Well, I know that summer is really not over for another month, but here in Maine the weather has suddenly decided (at least for today!) that boy, maybe fall really is on its way!  But that does not mean that reading comes to an end.  To the contrary!  We Mainers know the secret to surviving winter is laying in a good store of books.

Meanwhile, we while away the still-a-bit-warm months, nibbling on a bit of the prospective titles here and there as we go, just a morsel to tide us over in between county fairs, apple picking, and coffee drinking. 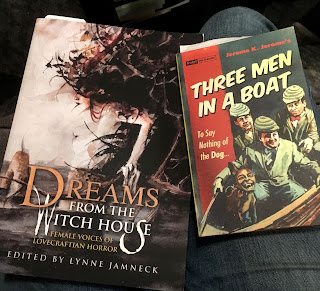 This time I'd love to talk about two diametrically opposed books. One is a classic, one is a new kid on the block (relatively speaking).

Let's talk about the classic first. Like so many other classics, I knew Jerome K. Jerome's Three Men in a Boat (to Say Nothing of the Dog) by reputation long before I read it.  In fact, I read Connie Willis' To Say Nothing of the Dog, an amazing and highly entertaining time travel novel riffing delightfully on Jerome's book, years before I read the original, which I tell you gave it a certain absurd level of surprise.

Jerome's original is a confection of frippery, ostensibly centered around what should be a relaxing riverboat journey in the company of friends.  Well, you know how that goes.  A little from Column A, a little from unmentioned Column B, C, and D.

It is worth noting the asides from the narrator, which are many and varied throughout the journey.  You learn such practical lessons as: how one should never, ever, travel with a large wheel of stinky cheese, no matter how much your nice friend wheedles you to take it with you.  This is probably a good lesson for me to learn before accidentally finding it out for myself in person.  Trust me.

In summary, Three Men in a Boat is a perfect book for dipping in and out of during idle moments.  I wish all of you may have many of these during your summer months, this year and for all the years to come!

The second book, Dreams from the Witch House: Female Voices of Lovecraftian Horror, edited by Lynne Jamneck, was released by Dark Regions Press in early 2016, about a year after the project was successfully funded (and then some!) via IndieGogo.  This is another book I've been dipping in and out of -- as I am wont to do with most short story anthologies I read.  So far the stories I've read have been wonderful -- eerie, unsettling, and uniquely different from much of the Lovecraftian fiction I've read in the past few decades.

The volume is a lush affair, oversized and rampant with full-color reproductions of paintings by Daniele Serra, an Italian illustrator some of you may know already from cover art on some of the Joe Lansdale novel reprint editions which I carry at the shop.  Authors include some old favorites like Joyce Carol Oates and Storm Constantine, and many newer authors for readers to explore further, such as Tamsym Muir, whose story "The Woman in the Hill" strikes just the right creepy note.

If you are interested in copies of either Three Men in a Boat or Dreams from the Witch House, I do have both of them at the shop for your reading pleasure, along with all sorts of other volumes, old and new, that have been flowing through our doors all summer long since we returned to a more normal operating schedule.  Drop in when you can -- you never know what you might find!

Some of you may have noticed that I missed a couple of weeks on here, mostly because I had the great pleasure of going to NecronomiCon 2017 a couple of weeks ago, down in Providence, Rhode Island.  It was a great feast of literary, cultural, and social delights.  I will write a post giving you the highlights shortly, so stay tuned!

Meanwhile, here is a snapshot of my haul from the weekend (not as big as it should have been; I demonstrated admirable restraint, but only because I'm going to be ordering a few things wholesale for the store shortly).

First, flanking the stack of bookish bounty, are a couple of issues of Ravenwood, full of the names of friends and other intriguing peeps, including cover art by Sam Heimer and Pencilmancer (Josh Yelle)!  Hot damn.  Next is Dean Kuhta's debut novel, Silvarum, promising all manner of marvels (Hi Dean!). 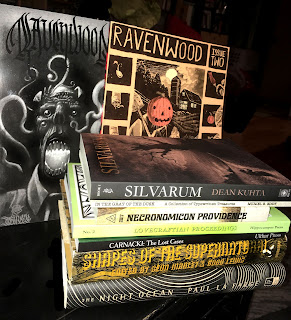 The slim volume below?  Oh, that's In the Gray of the Dusk: A Collection of Typewritten Treasures by Muriel E. Eddy, neighbor to H.P. Lovecraft himself, a nice addition to the copy of her other book, The Gentleman from Angell Street, which has been on my bookshelf since I bought it at one of the original NecronomiCons, back in the 1990s. Next on the menu is the delicious souvenir program from the convention, a feast unto itself.

Next, Lovecraftian Proceedings No. 2 from Hippocampus Press, recording the 2015 proceedings of the Dr. Henry Armitage Memorial Symposium, a celebration of Lovecraftian scholarship and exploration which features in the lecture schedule at the convention each year.

Following that is the anthology Carnacki: The Lost Cases: 12 Tales of the Classic Detective, edited by Sam Gafford, which I've been wanting to read since the idea for the collection was first announced.   Then, two titles bought from the nice folks at Cellar Stories, Providence RI's used book oasis, steps away from the historic Biltmore Hotel:  Shapes of the Supernatural, another great weird fiction anthology by the powerhouse editing team of two sisters, Seon Manley and Gogo Lewis, and The Night Ocean by Paul La Farge, which I've been meaning to read for a while now.

So... stay tuned for future developments!  And enjoy the tail-end of summer!!

Posted by Michelle Souliere at 11:43 PM No comments: