Behind the Scenes: What Goes On in Winter? 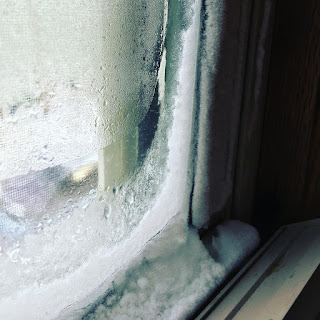 You may have noticed that, it being winter, the shop is operating under its official Winter Hours. This means we are open Thursday through Sunday.

So what goes on when the doors are closed? Perhaps you think these days might be spent in marathon reading catch-up sessions? Bonbon eating? Hours of cat photo sessions to get the perfect Instagram shot of Mr. Biscuits?

Well, these things are all nice, I will admit. However, while I do have one day off to run all the errands and cook food for the rest of the week with my other half, Tristan from Coast City Comics, and play with the cats (of course!), Tuesday and Wednesday are work days of another sort -- these two days are spent writing. With all the snow and ice outside, it's the perfect time to hunker down for hours on end and get a lot done. Indoor kids unite!

Some of you have read my first book, which came out just as the shop was opening -- Strange Maine: True Tales from the Pine Tree State. In the years since then, I have been sneaking in work on my next book whenever I can -- a difficult task when trying to make enough money to live on, as it turns out. But now, having passed our 8-year anniversary at the shop, and having survived so far, it is time to really turn up the heat on this book and get it out to the table.

This book will fill in the recent blanks in Maine's historic record when it comes to sightings within this state of large mystery mammals, specifically hominids. These are Maine sightings in which people have seen something large -- not a bear, not a moose, not a human being. Eyewitnesses have come forward with accounts dating back into the late 1960s, with other encounters moving right up into the 2000s.

Perhaps optimistically, I continue to theorize that there are many unexplained encounters in Maine that are not on record.

This has been a long process. I started working on the historic end of things (old newspaper articles from the 1800s, etc), sifting and sorting through digital and microfilm archives, over a decade ago. While that was a real needle-in-a-haystack challenge, my current focus has turned out to be even more complex. 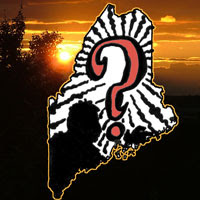 Over the last two years or so, I have been collecting eyewitness accounts. This involves talking to real live people, sometimes in person, more often over the phone or via email. My job is to record their experience, and put that encounter down on paper so that other people who are interested can read about it in the context of all the other sightings by people who -- to this day -- do not know what they saw. There is no place for it in the taxonomy of large Maine mammals. But even anomalies must find their place in history. That is where I come in -- to write it all down.

And what a process! To achieve the smoothly written narratives that people will (hopefully!) enjoy reading as they page through this book takes a ridiculous amount of behind-the-scenes work. When I have interviewed folks on the phone, or I begin from an existing video interview, I next transcribe the interview, typing and re-listening for hours on end, making sure that there are no mis-quotes (the human mind likes to transpose words and phrases between the time you listen to them and write them down, did you know that?).

Then I go through a printout of the transcription, and note all the important bits -- dates, places, details, a turn of phrase that really tells the person's point-of-view in the story. The first of the questions emerge. There is always something forgotten in the flow of an interview!

Then I have to try to write it all out coherently. Interviews, while they sometimes start out with a straightforward account, inevitably wind up wandering. Humans are very distractible creatures, after all! Details are clarified when I ask questions later in the talk, the scene is filled in before and aft, and as it turns out, the questions are never-ending, often resulting in follow-up emails containing elements that have to be added into the story later as well.

At the end of all that (sometimes spread out over months or years), one has the first draft of a chapter -- substantial, in a logical progression of events, and hopefully with a good build-up of mood, with its setting told in a way that the reader finds themselves there with the witness as they read along!

Last week I wrote the drafts of two chapters -- the first accounts to come out of my interviews. Each was a long account -- years long. I had to research certain elements to verify them -- place names, locations, family histories in the region. I still need to make fieldtrips to the sites themselves, so I can see them in person, to give me a better idea of the landscape. I want to be sure to get it right when I put it into words. I need to email the witnesses with more follow-up questions, things that I wondered about when I began finally writing it out -- and things I forgot to ask before.

This week I wrote the drafts of THREE chapters! While each of these were shorter accounts, the assembling of their elements into reading form was, if possible, more complex than last week's chapters. Questions were spread out between more than one witness in one case, and months of emails in another. Two of the cases were early interviews -- one happened before I even had come up with a worksheet to fill out, the notes from it scribbled on a piece of scrap paper.

Trying to place the locations on a map is often difficult -- one witness is unable to pinpoint the spot out in the remote wilderness from decades ago, another spot was somewhere in an area divided in four by the USGS topographic maps (this happens a surprising number of times, they often seem to take place at in-between areas). Another was tricky since they wanted to stay anonymous and the case involves family property.

Luckily, the two-witness case was well lined up. Both men were in agreement about the majority of details -- I interviewed them independently via phone. I just had to assemble the details, compare and contrast, and as each interview had gone in a different order due to differing conversational styles, there was a lot of flipping back and forth between the two printouts, trying to find details from one or the other. I eventually started checking off paragraphs in the printouts in an effort not to miss anything. Phew!

Add to all this further research -- corresponding with Maine black bear experts, reading about black bears, learning the basics of primatology, DNA sampling, how to build a hair trap, store and transport samples, cast tracks in the wild, reading about the Maine wilderness, reading histories of tiny northern towns, and cobbling together all the background that needs to be filled in to give these incidents their normal, everyday context, and to build a reasonable system for verifying what I can about what are often once-in-a-lifetime happenings.

So that's what I do when I'm not in the shop. That and continuing to pursue additional leads for other unknown accounts -- the search is still on!

Speaking of which -- If you or someone you know has had such a sighting or experience, please feel free to call me on my cellphone at (207)450-6695 -- please leave a message, so I can call you back, as I am working and unable to answer calls a fair amount of the time -- or simply email me at michelle.souliere@gmail.com -- or if you prefer pen and ink, you can write me at P.O. Box 5302, Portland, Maine 04101.

And thank you, as always, for reading.

Posted by Michelle Souliere at 9:51 AM No comments: