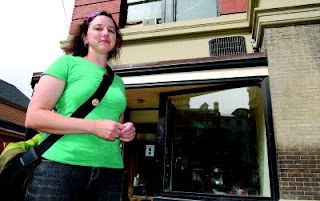 As posted in the Strange Maine blog...

Here's an interview I did with David Carkhuff of the Portland Daily Sun last week that should serve to fill you in on the latest and greatest.

On her path from award-winning blogger to fledgling book shop owner, Michelle Souliere is about a month away from unveiling The Green Hand on Congress Street.

The bookstore promises to be a nod to classic horror, mystery and other subjects that have formed the grist for her award-winning Strange Maine blog. At the same time, the shop, slated to open at 661 Congress Street near Longfellow Square, won't confine itself to strictly strange and eerie topics.

"The selection is definitely going to be slanted by my taste, but I'm going to have a wide selection. My hope is anyone who walks in will find something they're interested in," Souliere said in an interview Tuesday.

The Green Hand, however, is bound to appeal to customers of the International Cryptozoology Museum, mystery-animal researcher Loren Coleman's new feature attraction which is scheduled to open, also on Nov. 1, in the rear portion of the 661 Congress Street site.

Her husband, Tristan Gallagher, owns We Hate T-Shirts screen printing and The Fun Box Monster Emporium, which is located across the street from the new book shop at 656B Congress Street. He has run his store almost a year and at the current address since last spring. A loss of employment at University of Southern Maine for Souliere was a catalyst for pursuing her dream.

"For years I've wanted to open a book shop," Souliere said. "I've always had this little stash of books that would become part of my eventual stock. It was only this summer that I started seriously considering it. I was working at USM, and was in the process of being laid off because of different cutbacks and rearrangements, and I started interviewing for jobs, and I realized that these weren't jobs that I wanted particularly, they didn't necessarily get me any further with what I wanted to do with my life. Tristan said, 'Well, why are you waiting to open a book shop? Why don't you do it now?'"

It turned out to be a fateful conversation. Souliere knew Coleman — "We've been off and on corresponding for a few years now" — and figured a pairing of an atmospheric bookstore and a museum of exhibits featuring Bigfoot and other mysterious creatures would make a great fit in the Arts District.

An artist and illustrator, Souliere expected to "concoct a wonderful space that people are excited to visit."

"It's going to be kind of a hybrid, I want to create an atmosphere in here that's different than the other book shops in town. I would like to complement them," she said. "There's no way I can compete with their selections, especially Yes Books and Cunningham Books, they have been at this for years and have walls and walls of wonderful materials. So I thought I would try to bring something else into it, I've always been a fan of hybrid turn of the century Victorian gas lamps and a certain amount of art deco and a little bit of Asia motif. It's going to get a little more colorful in here."

The Green Hand captures a variety of images and motifs — organic growth, based on the concept of the green thumb; and also the traditional "old pulp magazine cover art of the green hand reaching out for the victim" and the science fiction idea of an alien hand.

"It's just an image that has come to me over and over again, it seems to evoke a lot of things for people. It's a wonderful, universal and mysterious symbol of what I'm trying to do here," she said.

Souliere anticipates offering a mix of used and new books in about 2,500 square feet of space, with additional space in back for the museum.

Her favorites are "weird fiction," horror and mystery stories by the likes of H.P. Lovecraft and M.R. James. Souliere said the blog and gazette will continue, possibly with more opportunity for research as she tends the book shop.

Souliere said the Arts District appears to be on the cusp of a revival, with several developments promising a rejuvenation of the Congress Street corridor.

Across the street at 660 Congress St., near her husband's store, Souliere is keping an eye on the old Zinnia's antique shop, where a developer is unveiling plans to create gallery space and four to six studios in a three-story building. Down the block from Souliere's shop is an ongoing renovation and reconstruction of the old USM dormitories, creating what promises to be residential and retail space.

"It seems like this area could really start to jump up and take the city by surprise," Souliere said.

Please also check out Carkhuff's companion article about the public opening of Loren Coleman's International Cryptozoology Museum!
Posted by Michelle Souliere at 8:28 AM