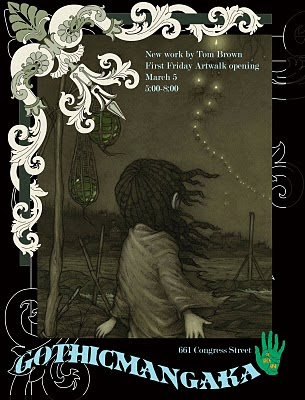 The Green Hand is pleased to present GOTHICMANGAKA from March 5th to March 31st, a solo show focusing on the exceptional artwork of Tom Brown.

Portland artist and comics creator Tom Brown offers a selection of intricate pencil work, including The Blind Fisherman sequence from his webcomic at www.itisacircle.com and work from The Hopeless Vendetta – a fictional online newspaper www.hopelessvendetta.wordpress.com

The Blind Fisherman is set in a fantasy-historical island off the coast of Maine. The imagery derives in part from Tom’s love of gothic literature and the trappings of weird tales. He is influenced by the Lovecraft tradition, but is also a keen observer of natural phenomena. Fantastical elements mingle with striking land and seascapes. Imagined flora and fauna nestles amongst more familiar forms. This is a re-imagined past, heavily influenced by Victoriana and Steampunk, but evolving its own aesthetic.

The manga influence primarily informs the character design and story telling. Figures have a stylized quality with emphasized facial features and expressions. Conventions of story telling inform the page layout. However, Tom also draws on western traditions, and does not adhere dogmatically to manga forms, resulting in a distinctive and hybrid style.

Tom works on Vellum Bristol comics boards using graphite. Images are created through shading and blending. The process gives finished images an unusual softness and a great deal of texture. Work is later adapted and colored digitally for use in the webcomic, but this show offers the hand-drawn pieces in their original state.

Tom can also be found online at www.mothfestival.wordpress.com and www.copperage.deviantart.com and is open to commissions. "Hopeless" is a collaboration between Tom and the UK author Brynneth N. Colvin http://www.brynneth.org.uk/
Posted by Michelle Souliere at 5:45 PM