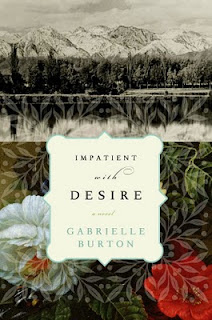 At first glance, Impatient with Desire appears to be a romance, at least judging from its cover. However, its tranquil and pleasant demeanor belies the contents within.

The focus of this book is the plight of the infamous Donner Party. Long heralded as perhaps the most lurid example of American cannibalism, the episode of the Donner Party has lodged in history's craw in a way that rivals any other single event in the era of the Westward-bound wagon trains. Today the story maintains a cult following, many of whom overlook the most important part of the story -- how it affected the individuals within the party.

In this book, Gabrielle Burton turns our head to look at this part of the story, the part that is much more difficult to keep in our sight. She does this through the voice of Tamsen Donner, as given in journal entries and letters written to her sister and never mailed. While crafted by Burton for the book, these entries and missives speak from Burton's absorption of Tamsen's history through a variety of sources and over a span of many years.

What I found remarkable about this book was the fact that I forgot I was reading it. Tamsen speaks through the pages to the reader, and before long the reader feels as though they know her. She confides her frustrations to us, her recollections of the journey that landed them behind winter's unforgiving door, shutting them in their unwanted mountain holdfast. We glimpse the character of her companions, the character of her own self and that of her husband, George, and the fresh-formed faces of their five daughters.

We hear the hints of unrest among the eighty pioneers that started out together to make a new start on the west coast. Bit by bit, the events that formed the smaller group that found themselves stranded in the Sierra Nevada Mountains are laid out before us, as recorded by Tamsen, gathering her recollections as the supplies dwindle and the winter lengthens.

What kept me coming back to the book, in spite of the ostensibly melancholy and desperate nature of the tale, is the grace and honesty with which Tamsen's voice tells it, with every ounce of her lively sensibilities.

While the wretched state of the residents of the camp is present and unavoidable, even in the face of ruin there remain sprinkled throughout crystal-clear moments of hope and joy, a testament to the spirit that drove the Donners to undertake the journey in the first place. There is humility and respect for humans in their direst states. There is an acquiescence in the face of unavoidable facts and in the face of choices that must be made in a worst case scenario. There is a refusal to give up without doing what is best and right for the people whose well-being one finds oneself responsible for.

All this rings through Tamsen's narrative, in her honest questions of herself, and in the transparency of the events as they unfold against the starkness of their winter siege. I found myself asking myself what I would do if I found myself in her place. I also found myself glad to know her, and glad to have read this book.

For those of you who are interested, Ms. Burton has started a Facebook discussion page for fans of the book.
Posted by Michelle Souliere at 8:12 PM