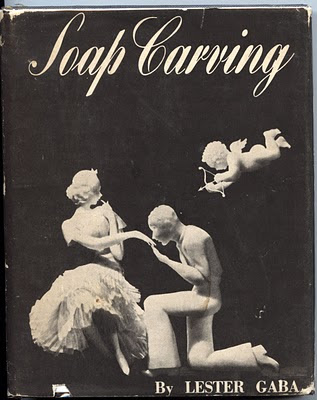 Another oddity from my scavenging -- a book about the fine art of soap carving, circa 1939.  The book was written by Lester Gaba, and published in cooperation with the National Soap Sculpture Committee.  No, I didn't know such a thing existed either.

The book is certainly one of the more interesting ones I found over the weekend, not only because of the photo illustrations of examples of the art, but also because of Gaba's narrative, which in addition to providing practical instruction, also introduces the novice soap sculptor to the philosophical, aesthetic and social controversies that he or she will be beleaguered by.

To anyone unfamiliar with soap carving, it would sound pompous to call it anything but good clean fun. In any case, it is certainly difficult to find a pigeonhole for it in the categories of art. It is easy enough for me to see the fun in it, surrounded as I am with soap chips and shavings every day from nine to five, but there are many people who find the classification mysterious.

They frequently ask, "Why do you use soap?" in that humorously patronizing way they have of showing interest in everything quaint. One lady hurriedly announced before I could answer the usual question, "I once had a cook who could make the loveliest decorations in butter, and you should have seen the flowers he carved out of radishes!"

While I do not pretend that soap carving will live through the centuries, I do feel that it is several steps beyond mere novelty. I no longer try very strenuously to establish its aesthetic status. If I say that soap sculpture is like painting in a third dimension, I am accused of vagueness...

Posted by Michelle Souliere at 5:41 PM