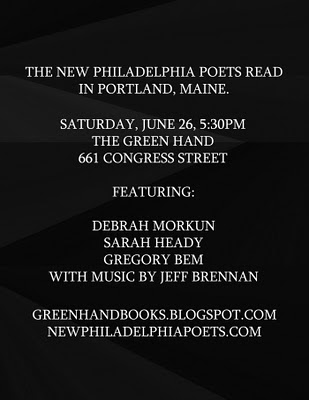 On this Saturday evening, June 26th, members of the poetry collective New Philadelphia Poets will be reading at the Green Hand Bookshop. Additionally guitarist Jeff Brennan will be performing songs. The event is free!

NPP’s primary focus is on arranging events that encourage the poetic culture of Philadelphia and welcome the influx of traveling writers and artists in a diverse spectrum of venues. Recent events have included Reckoning the Decade at the Bowery Poetry Club in New York, where NPP presented a retrospective on the first decade of the 21st century, and Invisible Keepsakes, an alchemical carnival put on in Isaiah Zagar’s Magic Gardens on South Street in Philadelphia during the 2009 Philly Fringe Festival.

Individual Performer Information:
Jeff Brennan comes from many places and has many homes, but currently lives in the Northern Liberties neighborhood of Philadelphia. He went to Roger Williams University where he experienced an existential decapitation via the academic scythe, and then moved to New York and suffered harsh employment conditions in every borough. Now in the City of Brotherly Love, he works with the estranged staff of the Philadelphia International Airport. He maintains his sanity in this madness by selling books about dysfunctional families, writing short fiction on the desert, dogs, and mothers, and by composing albums that comment on the destructive force of escalator life and pharmaceutical determinism.

Sarah Heady grew up in New York's Hudson Valley and moved to Philadelphia in 2007, after graduating from Oberlin College with degrees in art history and creative writing. She has been writing and producing events with the New Philadelphia Poets ever since, including the recently-birthed Jubilant Thicket series in South Philly she has started with Debrah Morkun, which features poets of all types and wine from the Philadelphia region. She is currently working on a poetic project centered around abandoned American spaces, Ohio and Bruce Springsteen. Sarah's day job consists of doing incredibly boring tasks for an incredibly cool organization, the City of Philadelphia Mural Arts Program. She likes to bike around the city and lose herself in nostalgia for American artifacts tossed aside by others. Ask her about the theme park.

Gregory Bem was born in Illinois, grew up in Gorham, Maine, lived in Rhode Island for a minute, and now finds his home in an ex-teddy bear factory in central Philadelphia. The screams of faux bear birth are loud and uncomfortable. Four days a week he works as an academic support aide at Olney High School West in North Philadelphia, which has the worst attendance and strongest academic failure in the city. The other three days are spent performing community service projects throughout the city, and working at Reading Terminal Market, the country’s largest covered urban market, as a gourmet grocery clerk. He’s an advocate for exploring urban decay, believes in the happiness of baking, runs Lone Byte Presson and off line, and with the New Philadelphia Poets hosts events and initiatives all over Philadelphia.

Debrah Morkun is one of the founding members of the New Philadelphia Poets. After hopscotching across the country in search of nameless wonders in places like San Francisco and New York City, Debrah aligned herself with the stars over Philadelphia. She currently lives in the Fishtown neighborhood with all the old ghosts and poets, and teaches college courses at a variety of local colleges and universities, but can be seen in many realms seeking out memory tapes, exploring structures of abandonment, and trying to find the historical heart and soul of American fortune, misfortune, and tradition. Her first full-length book of poems, Projection Machine, was released by BlazeVox Books in April 2010. She currently curates series and events with a community of others and is collecting inspiration for her current project, Hera Calf (working title). Says Debrah, “For this project I have a palette of influences, including The Adventures of Huckleberry Finn, National Geographic Guide to American Railroads, abandoned Detroit, Cleveland, Frick's Lock, Chippewa Lake Park, etc. Early Rock 'N Roll, auctioneers, train schedules, Detroit Techno, POP! art, amusement parks, Arthur Miller's The Price, nostalgia. Tall Tales, John Chapman, Brother Jonathan, Old Nick, Samuel Wilson, John Henry. Motown. Memory Tapes. Documentary folklore.”
Posted by Michelle Souliere at 4:41 PM