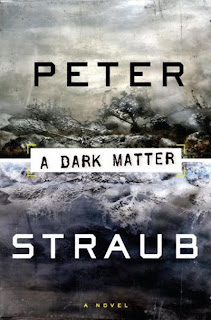 “No more than a dark shimmer in the air.” --Howard “Hootie” Bly

A Dark Matter is Peter Straub’s latest novel. Don’t let the fact that his work is classified as horror scare you away. This categorization glosses over the fact that in reality Straub writes speculative fiction of a highly literate nature, with a special focus on the shadows, which is true in this case and in past novels such as Shadowland.

As A Dark Matter opens, Lee Harwell is in search of his past. More correctly, he is in search of the past of his wife and friends, who experienced something one night in 1966 that they never explained to him, never let him in on, and never shared, though it shaped their lives and his from that night on.

In the mid 1960s, the ripples of world change were striding across the American landscape. There were those who adroitly gauged the effects of the growing social unrest and seized upon that wave. One of these was Spencer Mallon, a young adventurer guru, who swept into Madison, Wisconsin, and wowed his way into the hearts, minds, pantries and bedrooms of a series of young students.

All that talk of heady epiphanies ended on a night in mid-October, leaving behind Lee’s friends, forever altered, and another student’s mangled body in a field. There had been a transformation, as Mallon promised, but it wasn’t what any of them had expected.

Four decades later, Lee tries to put the pieces back together again, one person at a time.

Peter Straub’s books hold for me a certain type of enchantment, an allure that makes it difficult to nail down in my own words an accurate impression of his work. It has to do with mystery. It has to do with fleeting impressions and momentary glimpses that make you wonder. What was that about? Where did it come from? Did I really see that? Did I really hear that? Would a “yes” in answer to those last two questions really be a good thing?

Perhaps this quote from Lewis Carroll’s Through the Looking Glass will make matters a little clearer:


`The name of the song is called "Haddocks' Eyes."'
`Oh, that's the name of the song, is it?' Alice said, trying to feel interested.
`No, you don't understand,' the Knight said, looking a little vexed. `That's what the name is called. The name really is "The Aged Aged Man."'
`Then I ought to have said "That's what the song is called"?' Alice corrected herself.
`No, you oughtn't: that's quite another thing! The song is called "Ways and Means": but that's only what it's called, you know!'
`Well, what is the song, then?' said Alice, who was by this time completely bewildered.
`I was coming to that,' the Knight said. `The song really is "A-sitting On A Gate": and the tune's my own invention.'

I’m pretty sure I need to sit down and read the book again, because I want to. It’s been a few months now since I finished reading it for this review. It’s taken me that long to try to really process how the book captured me (and I still can’t quite do it). A lot of other reviewers have complained about the lack of oomph in the ending. I can see that – I think I myself felt a little let down, after the highs of the story itself. But if Straub really was doing an experiment with this book, in which time and perception weave their layers as bizarrely as they do in real life and its memories, why does the story really need an ending?

“You’ll see. Everything stops when you open the door.” --Spencer Mallon
Posted by Michelle Souliere at 12:28 AM