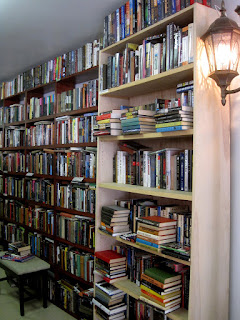 This is my shop’s mystery section. I myself am a longtime mystery reader, a habit that started when I first picked up on my mom’s love for Agatha Christie books at a young age. Over the years, my reading and preferences have ranged widely, and the selection here at the shop reflects that. The shelves also reflect my reading wish list for mysteries. There are so many I have yet to read!

I have two mystery sections – one being the paperback section, the other being the hardcover section. Some of us enjoy the paperback editions the most – handy for their portability, one can pick up the sleuthing where one left off at the drop of a hat. Some paperback mystery fans are in it for the alternatingly exquisite and/or lurid vintage cover art versions made available to consumers over the decades. Others enjoy the solidity of a hardcover, or again the hardcover preference may come from the thrill of encountering the unmistakable panache of dustjacket art of a bygone decade. 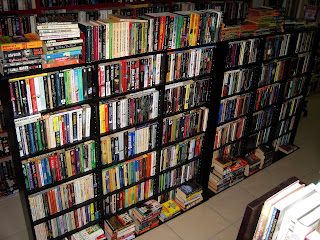 After an early start with the typical juvie staples of the genre such as Nate the Great, Nancy Drew, The Three Investigators, Encyclopedia Brown, Trixie Belden, and others, I graduated into my early reading of Agatha Christie titles, a habit which continues to this day. Early favorites included The Man in the Brown Suit (still a fun choice for pure light entertainment) and the classic Murder on the Orient Express. When I first started, I latched onto Hercules Poirot’s cases. Later I became fond of Miss Marple, with such titles as Sleeping Murder still among my top 10.

Now I find myself turning to the previously neglected (by me) titles -- Tommy and Tuppence Beresford books like N or M?, or other fun capers like Why Didn’t They Ask Evans? With this range of tastes in mind, I do my best to carry as many of the Christie titles as I can at any given time, a tricky challenge at best! While many arrive in paperback format, I also try to stock as many hardcovers as I can as well, to allow fans of that format their own selection. I even have some Christie titles in French! The wide variety of editions of Christie’s books alone are enough to keep a collector occupied for most of a lifetime.
As a youngster, I moved from Christie into cozy romps like Dorothy Gilman’s Mrs. Pollifax titles, then onto Jonathan Gash’s excellent Lovejoy series. Along the way I also stumbled into that wonderful side lane, the genre of historic mysteries, which resulted in a special fondness for the medieval problem solving in the Brother Cadfael books by Ellis Peters and the Victorian era archaeological adventures in Elizabeth Peters’ Amelia Peabody books.

Most recently, I finally found my way to the noir detective stories of Dashiell Hammett and Raymond Chandler. I knew all along that chances were excellent that I would love them, but somehow in all those years I had never gotten around to perusing their pages.
My guesswork was right – both Hammett and Chandler are now staples of my personal mystery library, and I keep the Green Hand’s shelves stocked with their titles as much as I am able. This is tricky, you see, because few people want to give up their old noir books – they are often favorites, to be held onto in perpetuity and re-read with great zest. Chandler I was particularly delighted by – he even made forays into weird fiction with stories like “The Bronze Door.” I have been told by customers and friends that I will also enjoy Charles Willeford and Richard Stark (aka Donald Westlake), in this vein.

Within the first year of the opening of the Green Hand Bookshop, I was sold an epic vintage mystery library that had been gathered over decades, read and re-read lovingly by the owners. I am still sifting through its volumes and discovering authors long out of print who sound absolutely fantastic. Among the boxes, I have stumbled across such treasures as Mr. Jelly’s Business and other obscure Arthur Upfield titles, and numerous examples of antiquated and quaint turns of phrase and dialogue, which I adore. There is nothing quite like the slang and colloquialisms of the first half of the twentieth century to entertain the anachronistic among us. 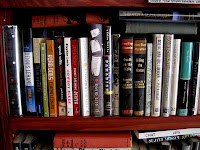 While I do stock plenty of best-sellers, I always have my eye out for the less common mysteries, the ones that slip through the cracks – European mysteries that trickle through import and translation slowly and inconsistently, historic mysteries with a readability that belies the painstaking research that underlies the story, old and long-out-of-print authors and titles that sound appealing despite their obscurity – I put all these on my shelves between the more common Patterson and Grafton novels in hopes that someone looking for a good story will pick them up some day and take them home. 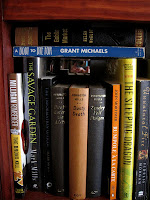 There is so much more to write regarding mystery books, but I will leave you with just this taste today, and with plans to write more spotlight articles about this and other sections in future weeks and months to come. There are whole untouched categories in this genre alone – the fun stuff, like Elmore Leonard, Carl Hiaasen, Tom Dorsey, and Charlaine Harris’s pre-True Blood mysteries – the obsessive sleuths, like Rex Stout’s Nero Wolfe – the sometimes-bad boys with a brain, like John Dunning’s Cliff Janeway and John Connolly’s Charlie Parker -- new ideas like Vertigo Comics' line of "graphic mysteries" which pair great mystery writers with comicbook artists. The list goes on and on, if you can follow the clues.

For reference, here is a partial list of some of the many authors I try my best to keep in stock in the Green Hand’s mystery section:

This is the first article in what I hope will become a long series of articles, each focusing on a different genre of fiction or category of non-fiction as found on the shelves of the Green Hand Bookshop. This series of spotlight features serve to hold a candle to niches within each section that in some cases might be overlooked. Each piece is painted for the reader purely out of love for its subject matter.

Posted by Michelle Souliere at 2:04 PM