Drat it all, I knew I forgot a few things in my post about the shop's Mystery section! I was responding to a blog-reader's email about the post, and realized I should just set some of this stuff down here and now before it escapes me again.

First of all, as a fan of everything Sherlock Holmes, I neglected to mention that I recently became a fan of the Mary Russell series by Laurie King. This series plays with the canon a bit by giving Sherlock a female foil, which has occasionally acerbic results, as you can imagine. I was a little ambivalent about the idea at first -- I mean, how far can you go with Sherlock Holmes before you've gone too far off track? But I decided to sample the series, and started out with The Moor simply because of A) its title ("Stay off the moors!!!") and B) because the Baskerville story is one of my favorite Doyle tales ever. I didn't really care that I was starting the series out of order. I've found some of my favorite series that way, like Van Reid's Moosepath League books (I started that one with Daniel Plainway: Or the Holiday Haunting of the Moosepath League when in search of my annual Christmas mystery book!). I did like the book. I must admit I still feel a little undecided about the liberties being taken with the Sherlock character, but the stories are good entertainment and more Holmes is better than none (although I find some of the Holmes pastiches to be dry as a bone, so I guess there are exceptions to my embracing of this subgenre).

After mentioning my early influences in the field, I did not expand the post's discussion into recent juvenile/YA fiction, which is an oft-neglected area rich in unmined ore for the bookhound. There are some really good mysteries for kids (and their adult companions!) out there -- The Theodosia series by R. L. LaFevers (starting with Theodosia and the Serpents of Chaos) is fantastic, with archaeology and diabolical plots galore, and Jennifer Allison's Gilda Joyce series (starting with Gilda Joyce: Psychic Investigator) is also fun, with a slightly older main character and a bit of a ghostly supernatural edge.

The Kiki Strike series by Kirsten Miller is also fun, although I felt like the second book kind of lost the momentum -- there's a third one due out (finally!) early next year, so maybe she'll pick back up with that one. It would be great to catch the mood of Kiki Strike: Inside the Shadow City and expand it further! The other author doing great things with the sleuthing habit is Blue Balliett, author of Chasing Vermeer, The Calder Game, The Wright 3, and more recently another book which is independent of the first series, The Danger Box. I really enjoyed all three of the books that run together as a sequence, and on reading The Danger Box it is clear that Balliett has no problem creating new voices and settings with equally compelling skill in storytelling. 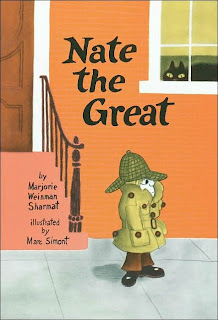 So far as the older series go, I still happily reread books in The Three Investigators series when the mood takes me. I found oddly enough that The Hardy Boys reread better for me than the Nancy Drew books, and I still need to sit down and revisit the Trixie Belden books to see how they sit with me all these years later. For even younger readers at an early reader pre-chapter book level, the Nate the Great books by Marjorie Weinman Sharmat (with their undeniably essential illustrations by Marc Simont) are a lot of fun, and are apt to create lifelong sleuthing enthusiasts with a surprising noir absurdist bent! Nate's mysterious neighbor Rosamond adds her own inimitable flair to the proceedings.

For those who noticed my mention of Chandler and Hammett in reference to the noir detective genre, but have little experience of them, I should add a note. Raymond Chandler is, along with Dashiell Hammett, one of the grand masters of the noir detective genre. If you are looking for a starting point for reading their work, there are some excellent collections available, which make it easy to make their acquaintance in your choice of short story or novel form -- Everyman's Library did a terrific anthology of Raymond Chandler's short stories a few years ago, which is what I started with. For those who prefer novels, The Long Goodbye is a favorite of many of my customers. Dashiell Hammett, on the other hand, is responsible for such classics as the Maltese Falcon and The Thin Man. I read his endlessly strange little vignette, The Dain Curse, and still need to sit down and sample his short stories, which are less well known.

Oh, and an author I entirely failed to mention in the article, though I meant to -- Ngaio Marsh! If you are an Agatha Christie fan, and have run out of titles, or if you like a good mid-century British mystery, I definitely recommend her. I had passed by Marsh's books for years for no apparent reason, then found myself with a copy of her Death of a Fool handy in a moment of need, and suddenly realized what I'd been missing out on for all these years. Like Christie, she was very prolific, writing dozens of books over the decades, and witty (although her sense of humor is very much her own). Her observations of human behavior in small village environments is fascinating and spiced with wonderful detail related in a highly entertaining fashion. Like Christie, her titles often changed depending on whether the book was printed in the UK or here in the US (for instance, Death of a Fool was also released as Off with His Head), so if you find yourself collecting her, arm yourself with lists that include both, lest you find yourself duplicating your library by accident!
Posted by Michelle Souliere at 3:33 PM