As I did last year when I attended ReaderCon (http://readercon.org), a speculative-fiction focus convention in Burlington, MA, I attended quite a few interesting panel discussions, during which I took notes. In case any of you might be interested in what some of the current discussions among authors and editors are like in the field, I’m going to post a series of my notes here on the blog! Enjoy…!

The second panel I attended was on Friday, July 12, at 11:00am when I sat down to be schooled on The Works of Fredric Brown as discussed by the panel of:
-- Eileen Gunn (leader)
-- Donald G. Keller
-- Diane Weinstein
-- Jacob Weisman
-- Gary Wolfe


The premise of the panel was this:
“Fredric Brown, the winner of the 2012 Cordwainer Smith Rediscovery Award, is remembered largely as a mystery writer, but his influence on SF was immense. His story “Arena” was adapted on Star Trek and paid homage to by Joanna Russ; his mordant short shorts like “Knock” and “Answer” have entered the folklore of the field; and his novels What Mad Universe? and Martians, Go Home pioneered comic SF. He was perhaps the only SF writer of the early 1950s to predict, in The Lights in the Sky Are Stars, that a successful space exploration program in the 1960s would be virtually abandoned by the 1990s. This panel will explore his achievements and lasting legacy.”

I attended this panel because I know little about Fredric Brown, but he was definitely a blip on my reading radar. One of the first large lots of books I bought for my shop was from Ronnie Bennett, who was packing to move back to the other Portland (OR). Even though she ruthlessly culled hundreds of books from her extensive personal library for the move, I vividly remembered her adamant refusal to part with her copies of Fredric Brown novels, including her longtime favorite, Martians Go Home! I had always dismissed Martians Go Home as some sort of flimsy Disney romp, and was surprised by Ronnie's attachment to the novel. She explained to me that the book was wonderful, the author brilliant, and I nodded and filed away the information until I stumbled across this panel discussion listed on the ReaderCon agenda and realized that now was the time I could illuminate myself on the topic of Brown and his works!

Eileen Gunn (SF author and editor) led off with a brief introduction to Brown, who died in 1972. While notable for his science fiction work, Brown's avid fans knew that he also wrote excellent mystery novels as well, striding between the two genres with aplomb. And with his ability to switch between genres, he also possessed a deeper ability to flip between the light and dark side of his work.

Donald Keller (SF&F editor and critic at the New York Review of SF and elsewhere) pointed out that Brown's first novel was published in 1949. 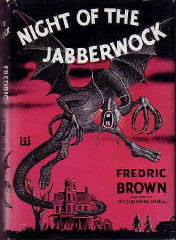 Jacob Weisman (editor, founder of Tachyon Publications) told us that there is a daffiness to Brown's work that explodes off the page, like a modern Lewis Carroll. (NOTE: This is a very apt description, since the first Brown book I read after this panel was a copy of Night of the Jabberwock, one of his mysteries, which is laden with Lewis Carroll chapter epigraphs and textual references. I picked it up at Bob Eldridge's table, and when I mentioned that I had never read Brown before, he pushed it at me and said, "Take it! Read it!")

Gary Wolfe (SF editor, critic, and biographer) discovered the works of Heironymous Bosch via the first Fredric Brown paperback he read, Honeymoon in Hell. He felt that Brown possessed a dark, pre-Dickian view of the world. (NOTE: a.k.a. Phildickian, referring to the tandem playfulness and paranoia found in the SF worlds of Philip K. Dick)

Brown was one of the first authors to talk about the eventual abandonment of the space program.

Eileen Gunn talked about how Brown's work was deceptively simple. (NOTE: After reading Night of the Jabberwock I can testify to this!)

Jacob Weisman mentioned Brown's tendency to write about ordinary people, again like Philip K. Dick's use of the "average Joe."

Diane Weinstein talked about Brown's direct style, and his use of color (many of his Nightmare series have color themes)

Gary Wolfe recommended a biography of Brown by Jack Seabrook, although it focuses more on Brown's mystery ouvre. (title: Martians and Misplaced Clues: The Life and Work of Fredric Brown)

Donald Keller described Brown's tendency to open books with a very everyday feel, and no real hint of later complexity in the plot.

His most famous television trope is the "Arena" episode of Star Trek, which was based on his short story of the same name.

Eileen Gunn expressed that Brown’s work for her embodies the SF of the 1930s and 1940s.

At this point the panel kindly related their favorite Brown titles for our benefit.

DK: The Lights in the Sky Are Stars (which he read as an absolute tragedy from the human point of view)

EG: Martians Go Home! had a delicate premise. "He goes away when you push him," Eileen said. She reiterated her fascination with his stories about linotype machines. (NOTE: which detail of course made me NEED to read him ASAP!)

Eileen Gunn wanted to know -- did the panel think that Brown was responsible for the way people view science fiction today?

GW: His fiction was ABOUT fiction! Meta-fiction! (e.g. Martians Go Home!). He did hang out a lot with mystery writers.

DW: He was not a mingler, though.

JW: He hung out with Mac Reynolds.

DK: The Prisoner television series was influenced by his work.

JW: Brown has permeated the culture so completely that most screenwriters, etc., don't necessarily realize that they are being influenced by his existing ideas.

GW: He wrote the shortest SF story ever: "Knock." This is a two sentence story, placed within the framework of another short story. Quite simply:
“The last man on Earth sat alone in a room. There was a knock on the door...”
Proto flash-fiction!

JW: Michael Swanwick is the current author best at dropping you right into the story ("the hook" is right there at the start). He says he has so many stories he wants to write that he doesn't have time to mess around writing drawn-out fiction.

EG: Eileen said that she herself doesn't write with the knowledge of what the end of her stories are. The story passes the "how am I going to get out of this?" point and somehow resolves itself as she writes. Knowing the ending would mean she is then bored and won't bother to finish writing the story, as it's moot!

JW: Brown had a short active career, then health problems set in during his 50s. He started writing in his 30s for trade publications, etc.

(NOTE: His bibliography can be found here: http://en.wikipedia.org/wiki/Fredric_Brown_bibliography)

NESFA (New England Science Fiction Association) has published an anthology of his complete SF stories, From These Ashes:
http://www.nesfa.org/press/Books/Brown-1.html

An audience member asked if the panel had any recommendations for fans of Brown who were looking for similarly interesting fiction:

Also, some of Brown’s mystery stories have been collected by Bruin Books in an omnibus edition titled Miss Darkness: The Great Short Crime Fiction of Fredric Brown, and Haffner Press http://www.haffnerpress.com/) is taking pre-orders for 2 mammoth volumes of Brown’s non-SF short stories and novels, which will arrange all these mystery, horror, noir, western, and detection tales in chronological order.

Swanwick’s The Periodic Table of Science Fiction was also recommended, as well as his collection The Sleep of Reason, which is based on Goya’s Los Caprichos etching series.

NOTE: Two of Brown’s pieces that were recommended at some point during all the discussions which sounded particularly interesting to me were 1) the short story “Nightmares in Yellow” and 2) the novel The Lights in the Sky Are Stars.

Posted by Michelle Souliere at 1:34 PM