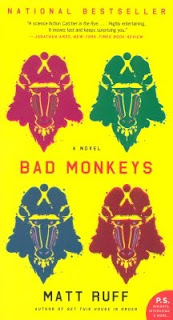 Just got a copy of this fun book into the shop...

Jane Charlotte is in jail on murder charges, confined to the psychiatric ward. Why? Well, her claim to be a member of the Department for the Final Disposition of Irredeemable Persons, a.k.a. "Bad Monkeys," is a start.

Jail psychologist Dr. Vale listens to her personal history, starting with her recruitment into the secret organization at the age of 14, after Jane discovered that the janitor at her school was the Angel of Death. It turned out the Bad Monkeys were already on this case, but Jane didn't find that out until it was almost too late.

American anthropologist and poet Loren Eiseley once said, "I am not nearly so interested in what monkey man was derived from as I am in what kind of monkey he is to become." So too the reader swings back and forth as they hear Jane's tale: is she a good monkey or a Bad Monkey?

Her story unfolds in a way that will seem eerily familiar to fans of the underground classic The Illuminatus! Trilogy. It's a quick read, because you won't want to put it down.