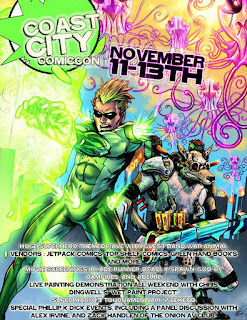 This weekend we're taking part in our first convention, the Coast City Comicon (tickets are available at the door). It's being held here in Portland at the Eastland Park Hotel on Saturday and Sunday, and it should be a blast! We will have local guest authors at our table, and loads of the tasty new Philip K. Dick books on sale. Huzzah!

Our main author guest is Michael Connor, who just wrapped up his art exhibit Fuzzy Allotropes 2 here at the shop. He will be at our table throughout the weekend (when he isn't heading panel discussions at the SPACE Gallery!). Our other author is Mark LaFlamme, Lewiston native, crime beat writer for the Lewiston Sun Journal, and a terrific horror author. Mark is being held hostage by alpacas so he will only be able to visit on Sunday afternoon, starting at 2:00. I recently reviewed his short story collection Box of Lies: http://greenhandbooks.blogspot.com/2011/10/review-mark-laflammes-box-of-lies.html

Here is the schedule of events for the convention as it stands now:

Game Geeks will be running Heroclix Superman Sealed Drafts all weekend, for $24 (clix included), as well as Magic The Gathering: Standard Constructed Draft tournaments. Check in at their table for more details, or you can also call their shop before the con at (207)767-1101.

LOCATION INFO
Main Convention Floor:
The Eastland Park Hotel is at 157 High Street, near the major intersection of High, Congress, and Free Streets, where the Portland Museum of Art is located. Opened as a grand establishment in 1927, the hotel has maintained itself over the decades as one of Portland's most prominent hotels. The convention is being held in one of the large event halls at the hotel. If you reserve rooms at the Eastland, make sure to mention you are attending the convention for a discount. http://www.eastlandparkhotel.com/

Discussion Panels and Film Screenings:
The SPACE Gallery is at 538 Congress Street, about a block and a half from the Eastland Hotel, where the convention floor is. This venue is small and heavily involved with the very young and vibrant local arts scene, as it is located in the same block as both the Maine College of Art, the Artist Studios Building, and the Institute of Contemporary Art. http://www.space538.org/

For a Google map which shows the distance between the two locations, which will allow you to get driving directions to either spot:
http://g.co/maps/v66qn
Posted by Michelle Souliere at 1:42 PM