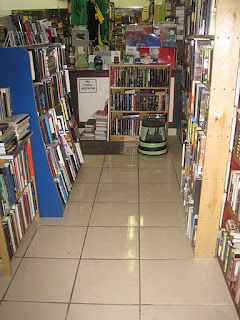 I started yesterday morning thinking the worst problem I was going to have was when I'd be able to get the rest of the Christmas decorations up, and when my shipments of various goodies and stocking stuffers would be arriving via UPS and FedEx. Silly me.

When I opened the door of the shop around 10:00am after running a few errands, I immediately smelled something very strange. Next, I heard the drip drip drip that I have dreaded hearing since the first leak the shop had, just after opening in 2009. I threw down my coat and bag and ran for the back of the store, and started moving items away from the water, starting with my computer.

Having a leak in a bookstore is bad enough, but the timing couldn't have been worse. :P The weekend of Black Friday? Are you kidding me?!! This is the short window of time when customers inject the economy with a much needed last hurrah before the months of winter drought kick in, namely January, February, and March. (Luckily, as they say, "That's what we have insurance for"...)

When I came in, water was dripping copiously from the area just in front of the counter and the area behind, where my work area and backstock sits. Water was trickling out near the counter from where it was flooding the ceiling crawlspace that covers most of the front part of the shop, and through the electrical fixtures (lights and smoke detectors) and vents over the first row of bookcases near the counter, and along the back wall of the work area and the side wall. Those of you who have been in the shop know just how many books are packed into this space. Miraculously a lot of them escaped unscathed, so while there were numerous book casualties, overall it could have been much, much worse.

I was told by the Trelawny workmen that someone upstairs stuffed a bunch of washcloths into a drain. Of course. Why wouldn't you? Seems perfectly normal to me. *smacks forehead with palm* Ahh, Congress Street. You are a wonder.

The shop is likely going to have to remain closed through Tuesday at least, which really stinks. I'm being hopeful, though, and waiting to hear from the ServPro and insurance assessors that I'll be meeting with on Monday. Catching the leak early on was a huge break, and ServPro's quick arrival and setup should make a big difference. With any luck no ceiling or walls will have to be replaced, just cleaned and repainted. (You can't see it, but I'm crossing my fingers.) 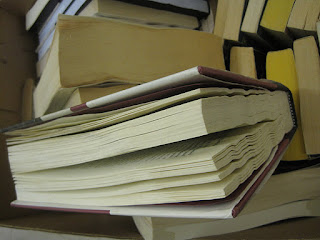 Today I'm spending the day tying up loose ends, updating everyone online, and then sitting down to the not very fun task of slogging through all the boxes of damaged books that will have to be thrown in the dump. Ugh.

But I'm just happy it wasn't worse (imagine if it had happened on Monday when I wasn't here), and that I DO have insurance, and I'm going to look at it as a chance to clean and reorganize my work area. Ack!!

I owe big, HUGE thanks to a bunch of folks who helped out.

The Portland Fire Department was quick to show up and diminish the chances of an electrical fire. Not only that but they helpfully brought in a bunch of tarps to protect the books in the at-risk area. AND they even helped lug books out of the way of the leak, definitely living up to their reputation of going above and beyond no matter how small the task. I hope that was their easiest call that day. Once they got called in, the Trelawny Building work crew did their best to fix what they could and assess the damage.

I had a crew of half a dozen friends who gave up their day off to lug books and help clean up the mess, all of whom are amazing lifesavers: Ross Kearney (and it was on his BIRTHDAY!!!), Jan Wilkinson, Amie & Dave Neikirk, Brandon Kawashima, Chad and Kristine Pennell -- you guys are awesome. I know who I can call if the apocalypse ever comes!!!