Although the Green Hand is ostensibly a used bookshop, we also try to carry a few select small press items that focus on our weird fiction interest. We have just restocked all the selections from Medusa Press's catalogue, with the addition of their new release, Vivian Meik's Devils' Drums! 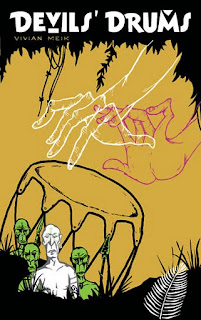 Since its publication in 1933 as part of the Creeps series, Vivian Meik's short story collection Devils' Drums has long been an especially desirable book for collectors of weird literature. When one considers the scarcity of the title and the fact that it hasn't been reprinted for nearly eighty years, it's easy to see why sellers ask for very high prices for worn copies.

This wouldn't mean much if the stories were not as enjoyable and as thrilling as they prove to be. Vivian Meik's best horror fiction is unconventional, and it is probably for this quality that his work will be remembered.

With this book Meik found his métier. Set in and around Portuguese East Africa (now Mozambique and Malawi), the ten chilling stories in Devils' Drums provide an abundance of zombies, curses, vengeful ghosts, and arcane witch doctors to appease the most pulp-hungry reader, and are a refreshing contrast to much of the British horror fiction of the early part of the twentieth century.

For this long-overdue reprint, the original contents have been augmented by two uncollected tales, and an episode from one of his autobiographical books that reads remarkably like his stories.

Douglas A. Anderson has also written a thorough, well-researched introduction to Vivian Meik's colorful career and adventurous life, with many anecdotes revealed here for the first time.

Medusa Press is proud to reissue Vivian Meik's Devils' Drums after decades of silence for a new generation to enjoy.

Medusa Press is producing really wonderful little volumes that focus on too-often neglected authors and their work, including the astoundingly good fiction of John Gordon (a personal favorite of mine). Not only are they produced in small batches, like some sort of microbrew bookery, the designs they cook up are succinct and delightful. And if that wasn't enough, the quality of the bindings is solid, attractive, and engineered for enjoyable reading.

Devils' Drums features striking 5-color cover art (see above), but the design doesn't stop there. The book is bound in matching ochre yellow cloth, with additional design elements struck into the cloth in black. The endpapers inside are a rich chocolate brown. 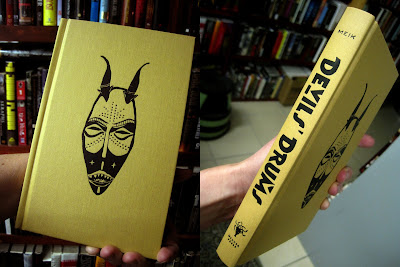 As I started to write this post, and began casting about for some additional information about the press, I was shocked and dismayed to find no interviews with Medusa's members online. Of course, not being able to leave well enough alone (as usual), I felt compelled to drop them a line and assuage my curiosity the good old fashioned way!

Elysia Chuh juggles many roles at Medusa Press, including designer, art director, and partner at Medusa Press (as well as processing their online orders from bookshops like us!), and was kind enough to answer my questions. Her official title is "Co-owner/Book Designer,” but that seems to only cover part of the job. She also designs for other publishers, and just did a couple of covers for Centipede Press which will be coming out in January: “Night and the City” and “London Stories,” both by Gerald Kersh.

Q: When did Medusa Press start?
We started in 2004 with the publication of Frank Chigas’ The Damp Chamber, which garnered some very good press for us, and allowed us to continue forward with John Gordon’s great works.

Q: Why did Medusa Press start? What was the inspiration, the initial goal, and has that evolved at all?
I think our initial intention was to put out reprints of obscure supernatural/horror collections, along with new works that harken back to that style. I think we haven’t evolved much from where we started, but in our case, that may be a good thing! We’re very much of a traditionalist mindset (classic story structure, book design and artwork that compliments the vintage/retro look).

Q: Who was involved in starting Medusa?
Medusa Press was started by a small group of people in the San Francisco Bay Area who have a passion for the genre, and is definitely a homegrown, part-time effort, which we work on when when there is time to do so. We would love to someday get it to the level where it could be a full-time company like others who started small (Nightshade Books, PS Publishing) but that might be a far way off.

Q: Starting up a small press as the economy foundered so heavily must have thrown a fair number of roadblocks in your way. Did it make you more determined to succeed, make your decisions the result of a more careful process...?
With small press, there is always a big challenge with getting a return on investment, so you have to make sure there’s an audience for it. Short story collections don’t sell (which is why big publishers never put them out), so it’s a dying art of sorts, one we want to preserve. With small press, it’s very expensive to print the books (unless you’re doing print-on-demand), and they don’t fly off the shelves, as there is a very select group of fans and collectors of the genre that will buy them on a regular basis. Our process in choosing the right books to put out is determined by several factors, such as whether the author’s works have already saturated the market (another Poe or Lovecraft collection?), whether the rights are easily available, and whether there is some desire from readers to have this author’s works in their collections. So, when one adds all this up, it can be a slow, time-consuming process to put a book out. As an example, Meik’s Devils' Drums took eight months to put out, from start to finish.

Q: Have folks been discovering you, or are you our little secret still?
We have been getting larger interest in our press since first appearing on the scene, and now have regular customers who look forward to the next release, regardless of how long it takes us to get it out! I suppose we are a little secret still, if our still unsold inventory is any indication. It’s hard vying for space with reviewers, which ultimately gets the visibility we need.

Q: Do you have any tidbits to tantalize readers with regarding future endeavors of Medusa?
We have a few projects in various stages that we are working on, and hope to have something out soon. Look out for more reprints from horror’s golden age, along with another collection from Frank Chigas, which he is currently working on.
Posted by Michelle Souliere at 4:57 PM